As the saying goes, you have to learn how to walk before you can run. In poker that absolutely starts with learning the proper poker hand rankings inside and out before you even sit down at the table.
It might seem daunting at first but much like learning to drive it’ll all become second nature soon enough.

A flush beats a straight. Three of a kind (“trips” or a “set”) beats two pair. A full house beats a flush. Quads beat a full house. There’s also no such thing as three pair, either (you’d be surprised how often players think “three pair” is a thing).

Check below for the full official ranking of poker hands and memorize it backwards and forwards. It’ll take a bit of time, but there’s nothing worse than getting into a poker game and realizing halfway into a big pot that you’re not exactly sure what you have or what it can beat. 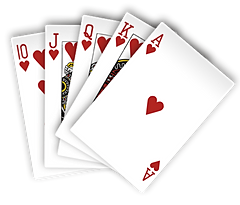 Royal Flush – 10-J-Q-K-A all of the same suit. Nothing can beat a royal flush. Ever, It’s always the best hand in poker and always will be. Don’t let anyone convince you suits are ranked differently, either. In poker they’re all worth the same. 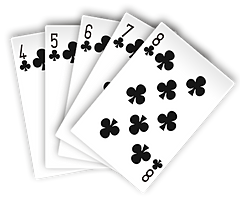 Straight Flush – Five cards in consecutive order all of the same suit. Eg. 5-6-7-8-9 all of diamonds. Only hand that beats it? The Royal Flush. 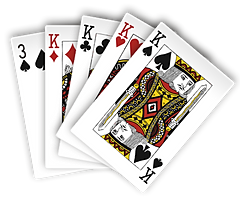 Four of a Kind (also known as “quads) – Four cards all of the same rank – eg K-K-K-K or 5-5-5-5.  If the four-of-a-kind is made up entirely of community cards (ie those in the middle of the table, not in your hand) the player with the highest “kicker” to complete the full five-card hand wins the pot. 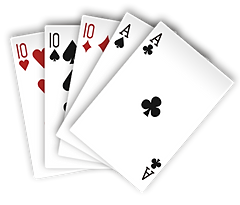 Full House – Three cards all of one rank plus two cards of another. EG 9-9-9-A-A or J-J-J-QQ. One of the most famous poker hands from film and TV (scriptwriters love to have people say “full house” it seems) the Full House (aka “a Boat”) isn’t the ultimate poker hand but it’s not far from it. An important point of note: The rank of the set of three determines the full house’s ultimate strength. Ie J-J-J-Q-Q beats 9-9-9-A-A 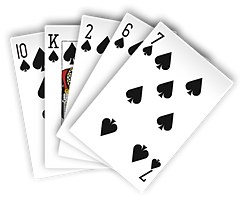 Flush – Five cards all of the same suit. One of the simplest poker hands to see is often one of the most confusing. Yes, it does beat a straight. The highest card in the flush determines its ranking compared to other flushes with an Ace in the hand trumping all others. Eg. A-9-7-3-2 beats K-Q-J-9-4. 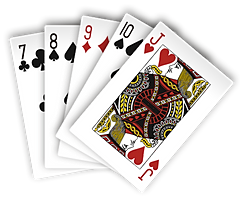 Straight – Five cards in consecutive order, regardless of suit. Aces can be high or low but cards can’t wrap around. Eg Q-K-A-2-3 is not a straight. Highest card determines the highest straight. Eg A-K-Q-J-T beats Q-J-T-9-8 which beats A-2-3-4-5 (ace is low in this case). 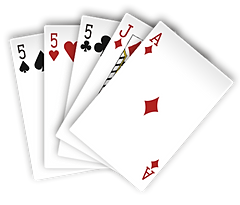 Three of a Kind – Three cards of same rank, two of non-matching rank. Eg. 9-9-9-A-J. If two players share the same three-of-a-kind (one in the hand, two on the board), the player with the highest kicker wins. 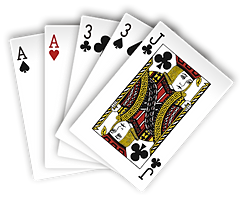 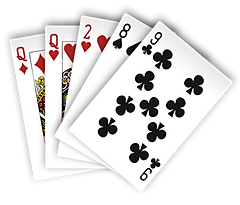 One Pair – Two cards of the same rank, three cards of mismatched ranks. Eg 8-8-K-7-2 is a pair of eights, king kicker. Higher pair beats any other single pair.

High Card – Five cards of mismatched ranks and suits. Highest card wins of no other player has a pair or better.